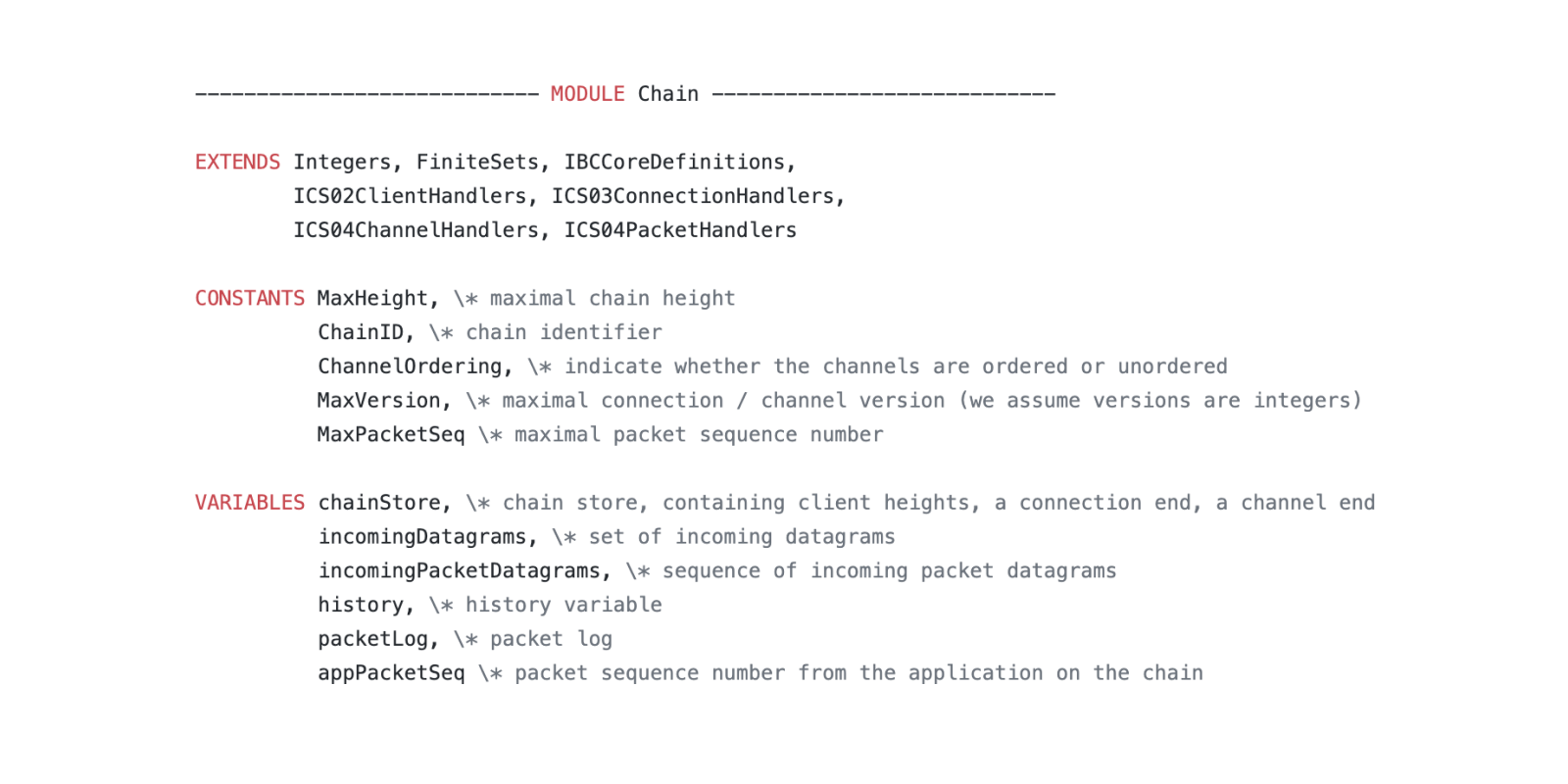 Large parts of the work of Informal Systems in the Cosmos ecosystem is on protocol design, specification, and correctness. For reliable distributed systems, not all the truth lies in the code. Capturing the distributed aspects of the protocols requires a rigorous understanding of the interactions between the code run on the different machines in a system, in particular if machines may act in an adversarial way. We capture these interactions in English specifications, and formalize them in TLA+. We put much effort in this work, as particular protocol bugs are hard to find on the code level. At the same time these bugs can be expensive in the context of adversarial environments with economic incentives.

While we are excited to add new features to the Cosmos ecosystem, we are determined to also do the unspectacular work of specifying what our systems are actually supposed to do, and to check whether they actually do that. The latter we do by manual audits (e.g., the IBC audit discussed below), and by writing TLA+ specifications that can be used for model-based testing, and model checking with Apalache.

IBC, the InterBlockchain Communication protocol, is a general purpose protocol for message passing on channels between blockchains. Since it’s release in the Stargate upgrade, it is set to transform the landscape of blockchain interoperability. Protocol design for IBC began in earnest in the summary of 2019, in the days leading up to the inaugural Interchain Conversations in Berlin. Led by Christopher Goes at Interchain GmbH, in close collaboration with team members at Informal Systems and Agoric, the IBC 1.0 specification in English and implementation in Go has been finalized and shipped in the Stargate upgrade.

As part of the review process in the months leading up to the Stargate release, Informal Systems conducted a protocol and security audit of the IBC specs and software that revealed some issues in both the protocol and implementation, necessitating a number of fixes before launch. Notably, and contrary to an alleged tradeoff between security and convenience, one of the security fixes actually simplified the overall UX of IBC. You can read more about the audit report from Informal Systems here and find the full report in our audits repository. If you’re interested in protocol and security audits, contact us.

Independently of the audit, we completed extensive formal specifications in TLA+ of both the core IBC protocols, including client updates, connection and channel handshakes, packet transmission, and the behavior of concurrent relayers, as well as the IBC fungible token transfer protocol. The models are written in a highly modular way to facilitate future verification efforts. While some properties and invariants are included, we are continuing to work on them and their verification with the Apalache model checker.

In the coming months, we plan to integrate these formal specifications of IBC into the main IBC English specification, and to work closely with Interchain GmbH on a refactor of the English specifications to improve their accessibility and correctness. We are also working to leverage the TLA+ specs for Model-Based Testing, which allows us to auto-generate complex language agnostic test sequences to run against any implementation of IBC. See our recent blog post for more about our model-based testing tools.

Last but not least, we have been leading a collaboration with the DCL lab at EPFL on the design of a shared security protocol for Cosmos that will allow zones to inherit security from the Cosmos Hub. The initial version of the protocol can be found here. We will continue this work and will further contribute our expertise (protocol design and correctness assurance) in the multi-organisational effort in order to bring shared security capabilities to the Cosmos Hub.

We are currently participating in the ABCI++ RFC that will enable a tighter integration of applications with Tendermint consensus. Once the discussions around the RFC stablizes, our goal is to formalize the API and the underlying concurrency model to ensure that Tendermint’s safety and liveness is maintained.

We’ve also begun a code audit on evidence detection and submission in Tendermint Core. Tendermint proof-of-stake security is based on incentivizing validators to correctly execute the protocol by detection and punishing misbehavior. As a result the involved code is highly critical to ensure security.

In the latter half of 2020, we made tremendous progress in formally verifying the safety (though not yet liveness!) of the Tendermint consensus and light client protocols. The core Tendermint consensus protocol is formalized in both TLA+ and in Ivy, with a focus on its safety and fork accountability. While the TLA+ work was done in-house, the Ivy work was done by Giuliano Losa of Galois with funding from the Interchain Foundation. The Ivy proofs were done for an arbitrary number of validators. The TLA+ specification was checked with Apalache for several configurations, where the number of validators was fixed, though by leveraging Apalache we were able to define an inductive invariant that could thus be checked for arbitrary length executions of the protocol. While Ivy was designed for this sort of high level reasoning about protocol properties (and less for detailed specifications of a protocol), TLA+, as a specification language, is less well equipped through its model checker for high-level reasoning about parameterized protocol properties. However, by making use of Apalache, our in-house TLA+ model checker, we’re able to verify much more advanced properties.

The fork accountability properties that were verified are particularly useful for reasoning about what happens if +1/3 of validators are malicious during consensus and cause a fork - they guarantee that, so long as +1/3 validators are behaving correctly, each of the malicious validators can be identified as having executed one of two possible attack tactics (so-called “equivocation” and “amnesia”), and can thus be punished.

We also produced specifications for the current versions of the Tendermint light client protocols completely in TLA+, including protocols for fork detection and accountability. A detailed account of our formalization of the core light-client verification protocol and our model checking results is now published on the arxiv. The detection and accountability can be found on github. We are continuously reviewing and analyzing these specifications.

Finally, as part of our collaboration with Professor Pedone’s lab at USI we have contributed to two Tendermint related papers that are currently under submission.

We’re continuing our work on formally specifying and verifying protocols in the Cosmos ecosystem, and helping to improve correctness assurance for the software. We’re especially focused now on some of the up coming protocol design in Tendermint (ABCI++) and IBC (shared security!), and on applying our new Model Based Testing tools to existing code. We’re also continuing to conduct audits, especially for Cosmos projects. If you’re interested in an audit, or in any of our formal verification services, please don’t hesitate to reach out!

We publish regular newsletters on what we're working on at Informal Systems. Stay up to date, and stay in touch, by subscribing today!