Cosmos has emerged as the leading platform to build blockchains devoted to a single application. Cosmos chains provide more scalability, configurability, and sovereignty than deploying a contract on a smart contract platform such as Ethereum.

However, Cosmos chains have historically had a major challenge to overcome: they must be secured by a decentralized validator set, with a valuable staking token. This has been a hurdle for many projects who would otherwise benefit from running on a Cosmos chain. Putting together a validator set can be a distraction from building a community of engaged users, and building in a staking token can complicate a project’s tokenomics. Further, the chain’s security is directly tied to the market cap of the staking token, which may take time to increase in value, thereby subjecting the project to numerous security risks along the way to maturity.

Not any more. With Interchain Security, developers will be able to launch a chain running their EVM, CosmWasm, or Cosmos-SDK application. This chain will be secured by the validator set of the Cosmos Hub, and the full ~$6b market cap of the Atom. This is known as a “consumer chain” since it consumes security from the Hub. Deploying a consumer chain can be as seamless as deploying a smart contract on a platform such as Ethereum, or the chain can be customized at a very low level using Cosmos-SDK.

There are two types of consumer chains: contract chains and custom chains.

This is a way for developers to quickly deploy a smart contract application secured by the entire Cosmos Hub, Both EVM and CosmWasm smart contracts will be supported at launch, and Informal Systems will provide a CLI tool which turns a folder of smart contracts into a consumer chain. At launch, each contract chain will need to be approved by a governance proposal on the Hub. We are working towards permissionless deployment, so that smart contract applications will have the opportunity to freely run without complicating validator operations. Here are some of the attributes of this type of consumer chain:

In this configuration, instead of running all logic as smart contracts, the developers fully customize the consumer chain at the Cosmos-SDK level. This allows for more customization at a low level, and potentially even better performance. Hub validators and delegators will need to look more closely at these customized consumer chains, since their performance and security attributes can not be as easily guaranteed. For this reason, the developers may need to put more effort into rallying their governance vote, however, it will never be possible to launch this type of chain permissionlessly. Here are some of the attributes of this type of consumer chain: 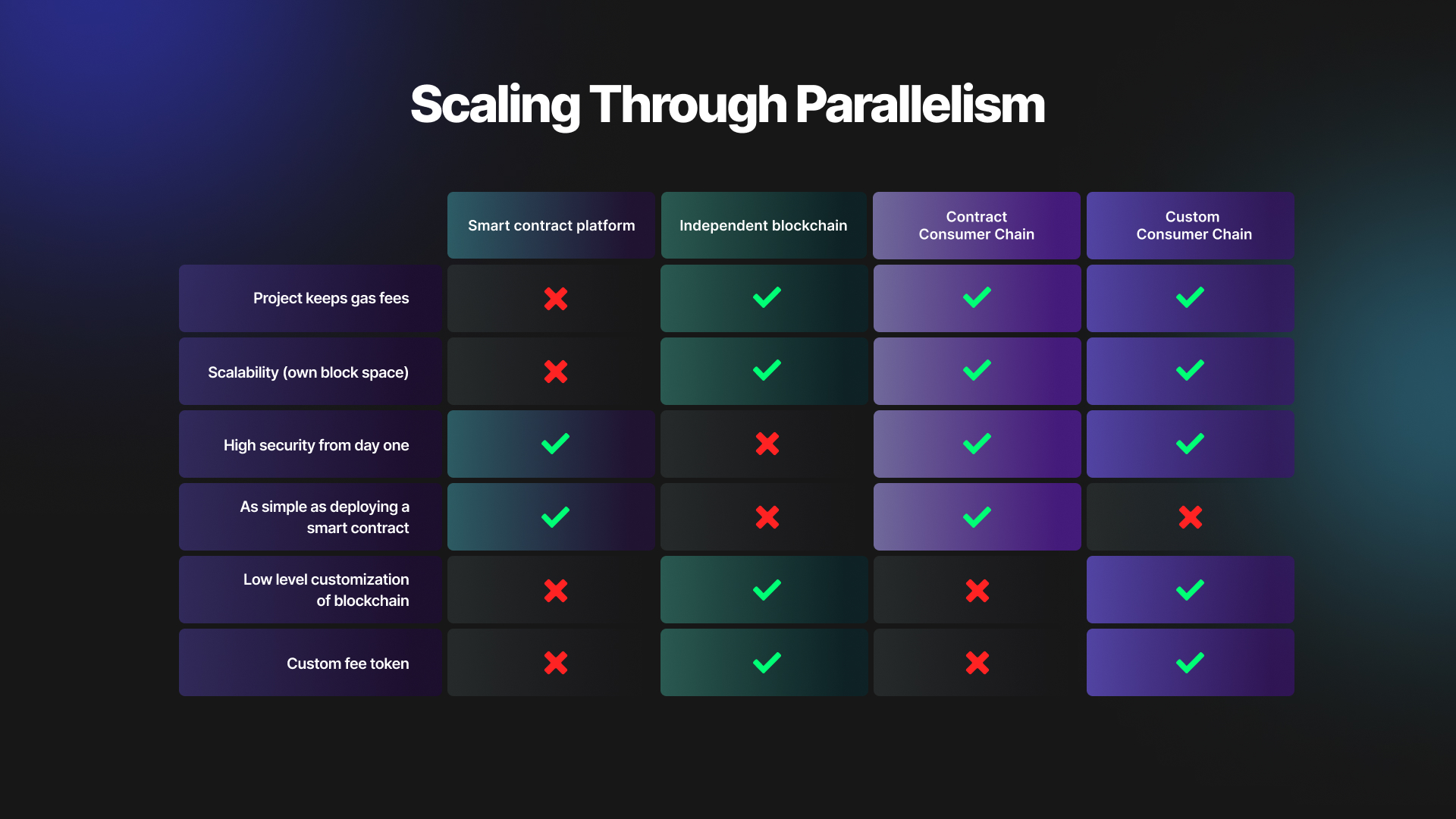 Regardless of how projects decide to launch, Interchain Security will instantly align incentives between projects and the Cosmos Hub community. On a practical level, consumer chains will be tightly integrated with one another, and with Cosmos Hub functionality. At the same time, they will retain seamless connectivity with independent Cosmos chains over IBC. By launching as a consumer chain, projects will get access to the Hub’s user base and benefit from network effects over time.

The Cosmos Hub and its network of consumer chains will form a tight cluster at the center of the Cosmos galaxy.

If you are interested in building with Interchain Security, reach out at hello@informal.systems. We look forward to hearing from you!