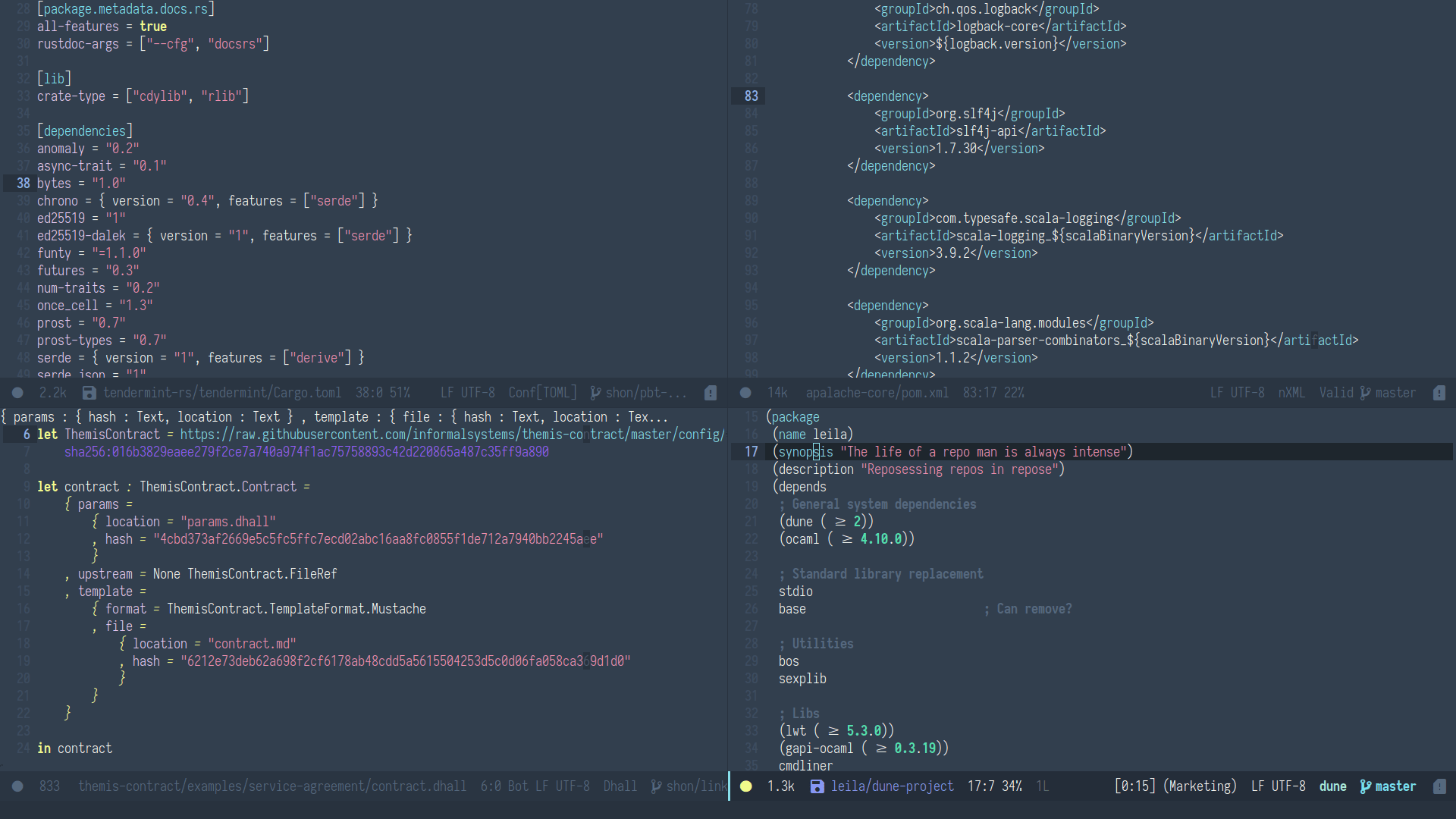 … the configuration determines the possible behavior of the machine.

What is configuration and why does it matter for software?

Let’s root our thinking on configuration in the etymology of the word:

late 14c. (implied in configured) “to form, dispose in a certain form,” from Latin configurare “to fashion after a pattern,” from assimilated form of com “with, together” (see con-) + figurare “to form, shape,” from figura “a shape, form, figure” (from PIE root *dheigh- “to form, build”).

Configuration is essentially concerned with shaping and forming the things in the world that are receptive to our dictates.

The software we use is composed of programs that impress their patterns into the rhythms of our life. While open source software invites user-authors to read and rewrite these programs at their source, configuration is an interface that allows user-authors to change program behavior without needing to rewrite and rebuild the programs. As such, it is the most accessible means for people to alter the programmed patterns that form and transform their lives. Questions around the user interface for program configuration pertain directly to questions about the means and degrees of empowerment in the information age.

In view of Informal System’s vision

We can articulate four elements in focus for our vision:

Considering software configuration in terms of interfaces for empowerment, we can draw clear connections between these elements and the concerns of configuration.

Our commitment to open-source ecosystems is rooted in our agreement with the core emancipatory agenda of the Free Software Movement, which seeks to protect and foster cooperation by ensuring access to inspect, transform, and run the programs that coordinate our interactions. Strictly speaking, configurability is orthogonal to open-source development, since closed-source programs can be arbitrarily configurable. But the extent to which we make our software susceptible to intervention and redirection by the people who use it is intimately related to the wider aims of libre software.

We are witnessing the most outsized ambitions of the cyberneticists become actualized and reshape our world. It is now clear that the control over society and the development of civilization cannot be separated from control over the programs that determine the courses of our movement, the networks of our sociality, the flows of our capital, and the availability of our collective knowledge. The struggle for cooperative ownership and governance cannot, therefore, be separated from the struggle to configure the programs that shape our reality.

As explained in the following, our preferred approach to configuration is via plain text files. A principle motivator here is the ease with which plain text configuration can become a shared interface for shaping distributed organizations: simply checking in a config file to a git repo gives distributed access and management for configuration of any shared programs that read from the file.

Software configuration is just as relevant for distributed programs as it is for any other piece of software. One of our main criteria in evaluating configuration formats is how easy they make it to reason about and communicate complex configurations. Reasonable configuration interfaces are even more critical for reliable distributed systems than they are for monolithic, centralized, synchronous programs, since the distributed nature of the systems already guarantees a high threshold of complexity.

Choice of configuration file format is one small decision among the countless decisions that go into designing and implementing software projects. But it is a decision that sits at the intersection of Informal System’s core concerns, and the impact of the decision have far reaching implications.

The following considerations are only concerned with formats of plain text configuration files. There are interfaces for configuring programs which are not based around editing text files and you’ve surely used something similar to one of the following:

But we won’t discuss those here.

Plain text configuration files have distinct benefits that make them especially appealing to anyone concerned with programmability (which should probably be everyone, given the ineluctable force of the digital revolution):

We see three approaches to file-based configuration predominating today. Each has its advantages, but also significant downsides.

These formats are generally limited to very simple key-value pairs. Users of Unix-like operating systems have likely encountered this species in a .cnf, .conf, .cfg or .ini file.

These are generally easy for humans to read and write, but are not standardized, and not a good choice for configurations of any complex or deeply nested attributes. The lack of principled format and standardization also means they are less susceptible to elegant or reliable generation. Since we take for granted that user authors should be able to program the configurations of their programs, this is a serious shortcoming.

TOML is an interesting configuration format in this space, since it is designed to provide the easy readability of key-value pair INI files, but it can support nested structures – up to a point. One hits this point sooner rather than later, however. It can also be tricky to reason about the scoping rules of the format, and challenging to generate non-trivial TOML configurations programmatically, and one can find plenty of other gripes besides.

It has become common practice to use human-readable data-serialization formats (JSON, YAML, XML, S-Expressions) for application and infrastructure configuration. While this has certain conveniences (e.g., there is a measure of transparency), we believe that this approach is suboptimal for plain text configuration management via configuration files.

In a plain text, open source environment, configuration files are the high-level interfaces that user-authors touch when shaping their programs to suit their needs. In contrast, data-serialization formats are – and should be – focused on machine readability and optimized for data exchange between programs. There is an impedance mismatch between the aims of data-serialization formats and the needs of the humans who configure programs.

We see the symptoms of this mismatch all around us. The most obvious sign is the neoplastic growth of configuration schemes for non-trivial programs, driven by the inadequacy of data-serialization formats for the task of user-author configuration. E.g.,

Configuration via a General Purpose Language

A common alternative is to use a general purpose programming language for configuration. E.g.,

Since general purpose programming languages are designed to enable humans to specify and communicate mechanizable programs, this approach doesn’t suffer the same problems as data-serialization formats. Instead, it suffers from a dual problem: whereas data-serialization formats are too static and inexpressive, general purpose programming language are too dynamic and expressive.

These problems are discussed at length in Caveat Configurator: How to replace configs with code, and why you might not want to.

In light of the above considerations, we propose the following guidelines.

Determine if you are configuring or serializing

Do you need a configuration system for your application, or is serialization enough?

the process of translating data structures or object state into a format that can be stored (for example, in a file or memory buffer) or transmitted (for example, across a network connection link) and reconstructed later (possibly in a different computer environment).

Configuration via a configuration file does, of course, require that the configured program be able to read the data written to the file, and so serialization and deserialization are always involved in any configurations that are persisted to disk. But this doesn’t mean we should force user-author’s to configure our program in the same format we use to serialize the data! That’s asking a human to do machine work.

If you only need to write some data to disk to read back later (e.g. because your program’s principle interface for configuration is via a toggle GUI or you’re storing internal state), or you just need to pass data between programs, then the standard serialization formats should suffice.

It is only when user-authors are expected to manually edit configuration files as the primary interface to controlling application behavior that we advise the following considerations:

Does your system actually need a configuration language? Perhaps it’s enough to just call one module “config”, set some constants there, and then rebuild and redeploy when something needs to change.

We have used this approach for an internal tool that generates parameterized worksheets. Our tool uses mdx to extract a documented data structure from a code block in the project’s README.md, which is then integrated into the source code during compilation, configuring the program’s behavior. This approach ensures that the application configuration can be kept entirely within the source code, while still presenting an accessible and easily understood interface for user-authors.

Since there is no configuration living outside the source code, any changes to the configuration will go through code review by application designers and maintainers, be verified by CI, and kept alongside the core application logic. This tight integration prevents the problems of configuration drift and the unreasonably expressive configuration systems discussed above.

This approach is discussed in Caveat Configurator: How to replace configs with code, and why you might not want to.

For all other human-focused configuration, use an appropriate DSL

Dhall is a programmable configuration language, providing algebraic data types, imports, and functions. Dhall is a language specific to the domain of configuration in general. And we think it is a suitable candidate for the lingua franca of general configuration:

We are currently using Dhall internally and as the preferred configuration language for themis-contract.

If you anticipate your configuration needs becoming extensive and requiring many novel or special-purpose constructs, then it may be worth the effort to write a bespoke configuration DSL. This is risky – since it can easily become a mess of adhoc conventions – and time consuming. But some projects have proven this can be a successful approach.

Two successful software projects that have developed their own configurations DSLs:

Careful choice of configuration interface can help make our programs more responsive to the needs of user-authors, and can contribute to software designs that empower rather than entertain. It is worth the energy to get this right in own work, and, if possible, to push powerful institutions to expose empowering and reasonable configuration mechanisms to their users.

More predictable, empowering, and accessible configuration formats are only a tiny step in the right direction, but every step counts.

We publish regular newsletters on what we're working on at Informal Systems. Stay up to date, and stay in touch, by subscribing today!